LUKE: My wild swimming journey started thanks to my wife, Dominique. When I met her, one of the things on her bucket list was that she wanted to swim in the Pier to Pub in Lorne, which is one of Australia’s most popular open water ocean races. A lot of the sea swimming we do here is in bays but this is a true open water event with the risk of unfriendly fish and big currents - it’s high stakes stuff. Naturally Dominique was quite nervous about it so I said, “I'll swim with you.”

We did a trial event together and I have to say, I felt like I was going to die the whole time. My ego was crushed because I thought I was a lot better than I was. It turns out that middle-aged men are incredibly competitive as far as swimmers go! But I just came out of this water thinking, “That was the best thing ever!”

That’s when I decided that I wanted to swim what’s known as the Rip, which is a stretch across the heads of the Port Phillip Bay. In my previous life as an extremely accomplished liar, I used to tell people I’d swum it so as part of the process of forgiving myself I decided I wanted to do it for real. 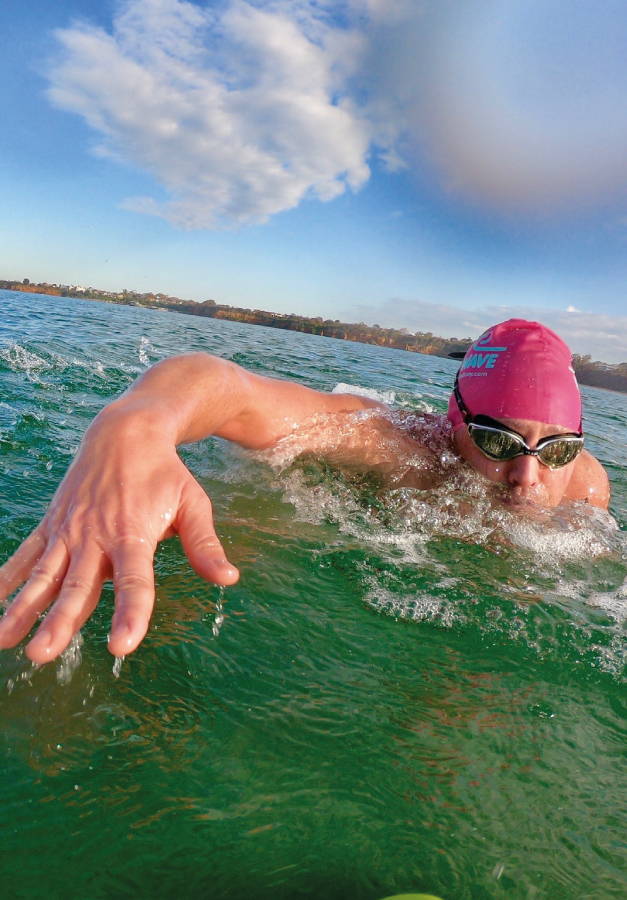 When I first started the journey of recovery from drugs and alcohol, aged 38 years old, I knew I had a long journey ahead of me to work out who Luke Richards really was. I had to come to terms with the consequences of the life I had been living and to make peace with the fact that I had missed out on so much.

My problems started young. My parents split up when I was two and when my dad remarried and had a second family, my sister and I became second best. I didn’t fit in well at school and was brutally bullied for most of my early secondary school days. At the age of around 11 or 12, I’d had enough of this planet. That was the first time I tried to take my own life.

Luckily my sister just happened to come home from school at the right time. And that's actually been the story of my lack of success in that area. Like somehow the universe has just intervened at the perfect time and moment for me. Despite my best efforts I'm here.

Descent into drug and alcohol addiction

My first addiction was drugs. I'd met and fallen in love with a girl in my late teens but when we eventually broke up in my mid-20s, I was lost. My identity was formed around her so when you detached me from that I was gone. I’d always refused drugs from my friends at parties but after the break up I thought, why not? They’d always been ok. The problem was that for me the drugs immediately erased all the pain I’d felt all my life. And that was it.

For the next seven years I was under the influence of drugs pretty much 24 hours a day, seven days a week with very few clean days in between. Then I met someone who didn’t want to be involved with a druggie so incredibly I put it down. We ended up getting married but when that marriage dissolved in a blaze of glory, I was back where I started.

I decided that I would go to the bottle shop and drink so much that I die from alcohol poisoning. And I almost achieved that goal. Except one of my best mates, Matt, found me and stayed with me until I was somewhat straight.

The problem was that it didn’t stop there. The drinking got progressively worse from that point. I couldn’t regulate my drinking at all and that’s really the difference between dependence and addiction. You lose your ability to say no. In the end I was drinking a litre of bourbon a day.

"Swimming has become this way to manage my mental health but it’s also a platform for me to show people that recovery is possible no matter how far you fall." -  Luke 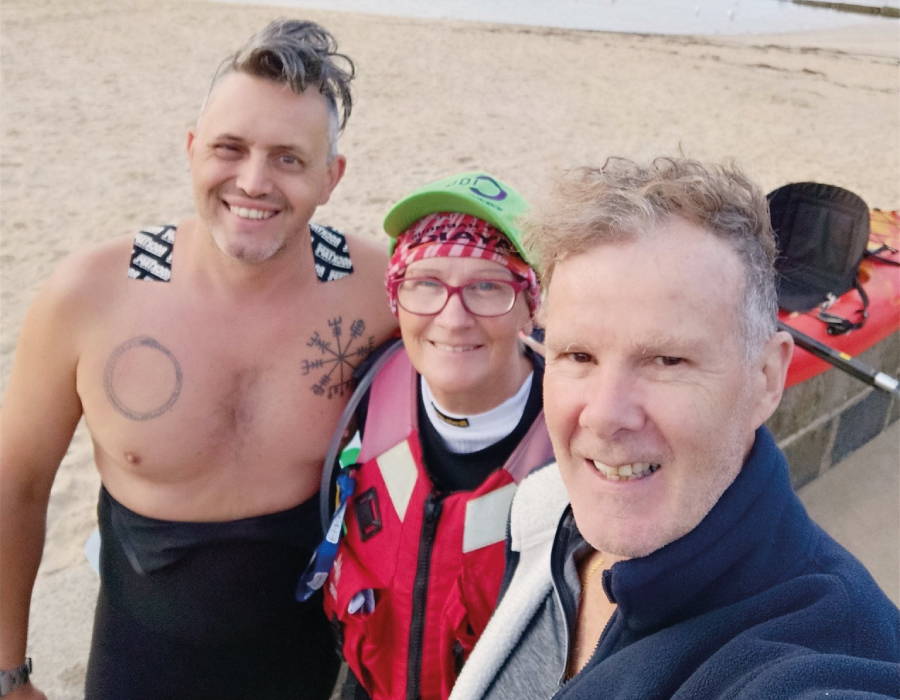 Throughout my life, no one ever really knew what was going on with me, not since my sister walked in on me when I was 11. My friend Matt was the only one who had an idea. But after trying to take my life again in my late 30s, I was in hospital with a lot of time to think. And I decided that I didn’t want to die.

That was the start of the recovery process. But it took another eight months of destruction for things to really change. Another important step was realising I was close to losing my job. I’d been “sick” and disappeared one too many times. So I took a week off to try and get sober, just sipping a small amount of gin each day to ease the withdrawal. It didn’t work. I woke up three days later on my bed and realised that I couldn't do it by myself.

In the big book of AA there’s this passage that says if you follow our path you won’t fail - but you have to be honest. And I realised I’d been lying this whole time to myself and everyone.

So I started calling all the people I’d been lying to and told them exactly what was going on. I went to a meeting and really liked it. From the first time I attended that meeting, I haven't had a drink and in fact, I haven't even pined after one, so powerful was the experience.

Finding a new life and a family

Like I said, recovery meant having to face up to the fact that I might have missed out on things like the chance to be happy with someone and start a family. But literally a couple of months later the universe dropped Domonique into my lap. I would never have believed that I would end up being a husband and a father - my sons are 5 and 3 now. 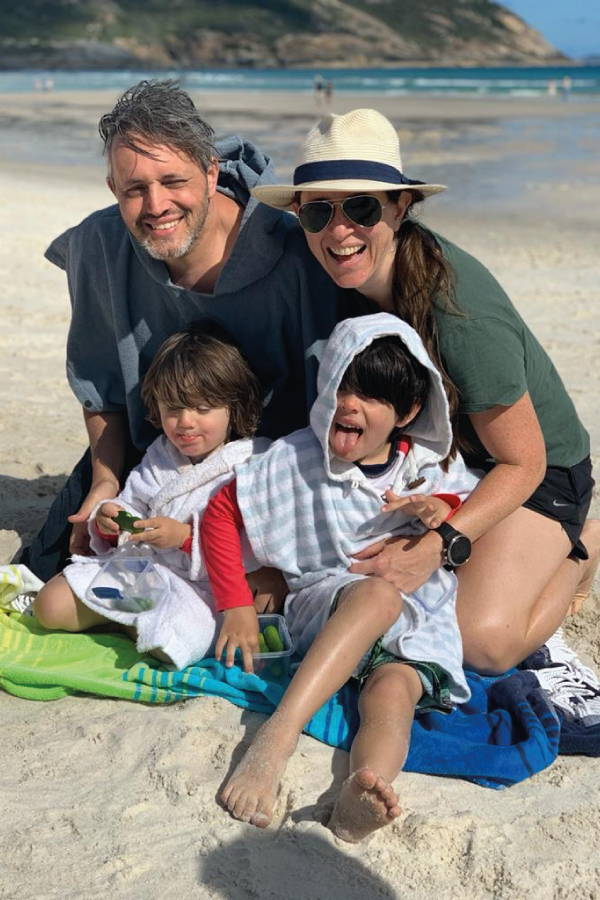 I love swimming with my family. I'm acutely aware that my kids have to find their own way - to do whatever sport they choose to play. But we are still down the beach as much as humanly possible. My eldest son was two weeks old the first time I had him in the water. Once they’re old enough, I'll take them surfing too. I’m glad that their earliest memories of swimming will be of their dad teaching them to swim.

There's a writer called Johann Hari who says in his TED talk that the opposite of addiction is not sobriety, it's connection. I don't go to AA anymore because it wasn't the medicine I needed for the future. But open water swimming and the community and the people around has very much replaced it. They have my life in their hands when we go in the water. And I have theirs. I don't know what the right term is, I’m going to call it a brotherhood, a unity that we all share.

Connection to people and the environment itself is what's incredibly powerful. There's just nothing like being in the middle of the bay, in the middle of this open water, being permanently humbled by nature and realising that you have to be really careful all the time.

So swimming has become this way to manage my mental health but it’s also a platform for me to show people that recovery is possible no matter how far you fall. That you can come back and do anything you like.

And it’s a good analogy for my life too. I can't get in the water and swim for 10 hours by myself. I need people. I need someone to guide me through the course because I can't see 25 kilometers in a straight line - I'll just swim around in circles - I need people on a boat to be there in case I get into trouble. And that's exactly what recovery is, you know?

PETER: When I first met Luke, at the Bay Open Water Swimmers group, I had no idea we would be such good friends or that he would end up very likely saving my life.

At first I thought of him as the gadget man because he always had the latest tech gadgets, like a camera perched on an inflatable that he would take swimming with him. He got some amazing photos with that, which was a real talking point for us.

Over time we got to know each other better - we’d swim together and get a coffee or a bite to eat with other people from the group afterwards. We’ve also done road trips together, going to swimming events and taking part in duo swimming competitions.

Luke is a real straight shooter. He’s always been very open about his past and although I was a little shocked at first, I was also very proud that he felt able to share it with me and the rest of the swimming group.

Over the years we’ve known each other, he’s shared different stories with me and I guess that’s allowed me to be more open about myself too.

Luke is also incredibly kind, thoughtful and caring of others. He always wants to help people. And last winter, he proved it when he risked his own safety to rescue me. We were doing our regular early morning swim. When we arrived down at the beach there was a thick layer of heavy fog. None of us had swum in the fog before so we just prepared for the swim and went down to the water’s edge as usual, even though we couldn’t see more than 5 meters ahead of us.

I remember saying, “Well, this is a first.” And everyone just sort of nodded and started swimming out to our usual start point. I put my head down and did about 6 strokes - and when I looked up to take a breath, everyone had gone. I couldn’t see anyone. I called out but no one returned my calls so I started swimming in the direction I thought they’d gone. Then I realised it would probably be safer to get back to shore so I turned what I thought was 180 degrees and carried on.

Lost and found at sea

Except I wasn’t swimming back to shore. I realised later, when I looked at the data from my Garmin watch, that I’d been swimming parallel to the shore. At one point I heard a dog barking but the sound echoed all around me and completely disoriented me. I had been in the water for almost an hour - in temperatures of 10 degrees with no wetsuit - when out of the fog I saw Luke paddling on a surf ski. There was more anxiety on his face than I imagine there was on mine!

He’d rallied a group of people to try and find me, many of which told me that they were concerned about going too far in case they got lost too. But Luke, he was so desperate to find me he didn’t even think about it, he just got on his surf ski and started paddling.

That was definitely a bonding experience for us. For someone to take that chance on himself, that’s a pretty amazing thing to do. Luke and I have a lot more years of swimming together ahead. Next year we’re planning to swim the English Channel. It’s important to have a great buddy with a common vision and dream to train with.

For information on Luke and his journey, be sure to visit his page: https://www.swim4recovery.com.au/